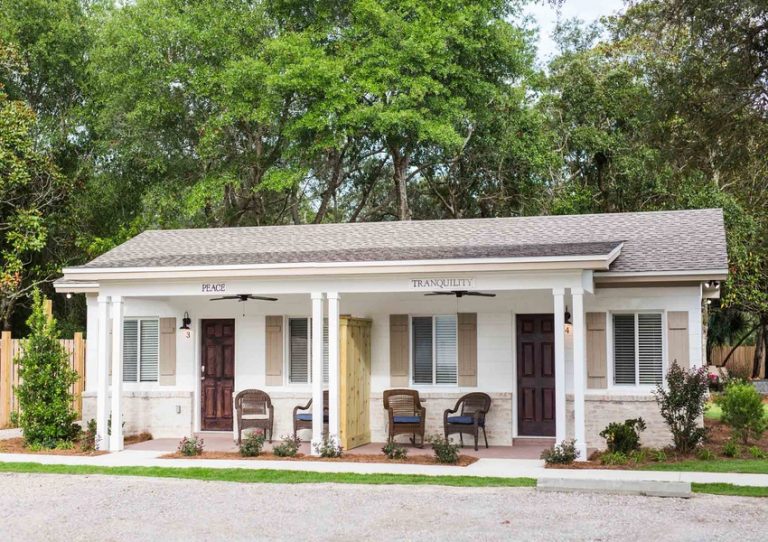 Cottages by the Bay rests on land that was once several lots, individually owned facing either Calhoun Avenue or Sibert Avenue. Their names may be new, but their stories stretch back to the early 1900’s. We are so happy to be able to restore and renovate these cottages, offering visitors one of the few opportunities to experience the history of our one time small fishing village.

We purchased 118 Calhoun Avenue in August 2015. The first building on this ¾ acre of land was originally built in 1952 and we now call it Something Blue. Mr. M. L. Smith had purchased the raw land from Coleman Kelly and built Something Blue for his first family home. Then, a year later he built another small cottage for his mother; it was torn down in the early 2000s. Later he built Better Together, Peace and Tranquility as rental properties.

After a few years, the Smith family sold the property to Mr. Braden in 1959 and moved to Pensacola. Apparently, Mr. Braden built the small block structure (now our office) at the front of Calhoun as a barbecue pit. We can substantiate this because we removed a red brick barbecue pit. When we purchased, this structure had been used as storage. During renovations, the old, flat roof caved in, but we were able to salvage two corners of the original structure and recycle some old tin roofing from other buildings for the gable ends of our new storage and office.

Not long after our purchase, Mr. Smith’s son, Butch and his wife Jerry, stopped by. They now live in Mississippi but shared some wonderful memories of growing up here. As a child, Butch lived in Something Blue with his parents, two brothers, and three sisters. At the time, it had two bedrooms and one bathroom. He attended elementary school right across the street at Clement Taylor Park. He kept three horses, Susie, Midnight and Rusty, in a corral with a makeshift barn between Tranquility and Something Blue. When visiting with us, he shared a story of a famous photograph of a water-skiing boy being pulled by a horse and rider on the Destin Harbor. The horse and rider were Butch and his horse, Susie. Another interesting tidbit that Butch shared was the original phone number for their cottage. Phone numbers in the 50s were three-digit numbers, and his was “476.”

We purchased the second parcel at 109 Sibert Avenue. We bought this property from Ms. Joanne Wells. Joanne is the Aunt of Mrs. Mary Huntz who owned the adjacent 115 Sibert Ave (Humble and Kind). Mary grew up in the home with her parents and brother, James Wells. Their parents are resting in the cemetery right across the street. James was the Okaloosa County “Under Sheriff” stationed in Destin for years. As with the original Calhoun land, the Sibert side has its own history.

For instance, the oldest structure on the Sibert Avenue side is Love Letter. Originally built in 1935, the floor joists were sitting on cypress tree stumps instead of concrete blocks. This was a real surprise but it made sense. In the 1930s, that was the only construction material. Surprisingly, the majority of the stumps were in good condition, but we replaced them with concrete blocks anyway. Another unique characteristic of this cottage is the ceiling height in the kitchen and living room. These are the original ceilings and are seven feet, six inches high instead of eight feet, which is today’s norm. We guess people were shorter back in the 1930s!

Humble and Kind was built in 1963 and was originally 1000 square feet (25×40) and sits on ½ of an acre of land. The floors are the original hardwoods, as well as the tongue and groove pine on the ceilings and walls in the living room and kitchen.
The newest structure is Family Tradition. Built in 1985, this property is the largest, offering accommodations for up to 10. We remodeled it to share the same nostalgic feel and modern conveniences of the others.

Altogether, the Cottages by the Bay are a unique piece of Destin’s history and even though every cottage has a different story of how it came to be, we have loved the process of renovating them and creating Cottages by the Bay. With their wonderful accommodations and great location, they can be the perfect spot for your company’s corporate retreat in Destin, family vacation or friend’s getaway. Explore the availability or contact us today!